Grease Was Not The Word 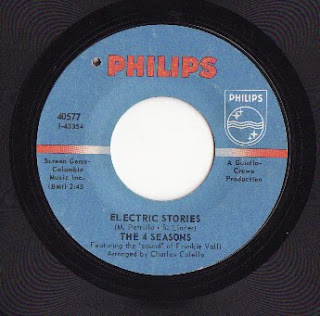 I remmember when this came out. Thought it was ggggggrrrrrrrrr-EAT! It still is... Thanx...

1/19/11
RobGems.ca
This single came in 1969, when the 4 Seasons wanted to go contemporary, & thus attempted to "psychadlicize" their sound to gain a new audience. A whole LP (Genuine Imitation Life Gazette), 5 singles 1968-1970 (including "Saturday's Father" & "Idaho") tried to keep the Seasons "in the groove" with hippie audiences, but shocked their older, do-wop listeners,so the records were moderately successful at best. "Electric Srories" didn't appear on "Gazette", but the song boasts with sharp lyrics about a town crier who spreads love stories tabloid-styled about men's peculiaralities towards women's affections. The Song did mildly well , charting at # 77 Nationally, but it would take the group 6 years & several personal changes (other than Frankie Valli) to reach the Top 10 again with "Who Loves You" in 1975.