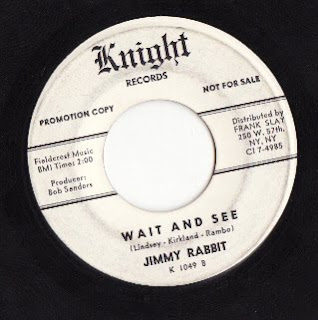 Jimmy rabbitt (note the spelling: small r, double t) Is a D.J. who started out in Texas, at KLIF/AM, Dallas around 1964. He has a web-site: WWW.Jimmyrabbitt.Com He was in several bands in the 60's, but never left radio. He sojourned out West to California around 1968, wound up being a legendary on air personality of Los Angeles FM radio (KMET, KROQ). He released a Country LP on Capitol records in 1976. He is still on radio live twice weekly. PS ~ Hey, Red, he's a pal of mine; would ya wanna sell me that Knight Records 45? Lemme know, bro at: TICDS@SBCGlobal.Net Thanx for this groovy post.