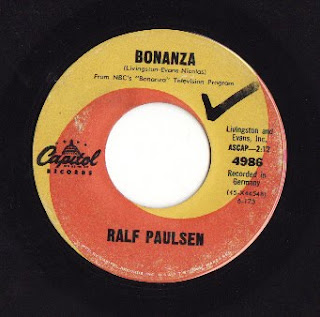 thanks for this. but I remember the theme sounded different in Germany, more dynamic. This one is close to Johnny Cash's version. Anyway, thanks!

I can see the Wehrmacht double-timing through France singing this tune.

Well, this doesn't have a thing to do with the Wehrmacht. Why do people all over the world we Germans are nazis? "Bonanza" was invented years later and no soldier would have sung songs from the USA. This is rubbish...

I have several of Ralf's Songs, my favorite is his version of Mr.Ed. Mellow, to MRB's comment I understand the sensitivity, but I do not think it was meant in a harsh way. I always envision this in some sort of Monty Python sketch.

I think you're right, sorry MRB. But comments like this make me angry in some way... :)

Mellow Is that the actual backing track from Johnny's version? It sounds real close.

No, it's not the same I think. Luther's guitar style cannot be copied. On Cash's version, Perkins played with another guitar model which he began to use in the early 1960s or so, which got a more "flashy" sound. You're right, the backing sounds very similar, but there are some changes in the structure of the song. In the middle, there's also a chord change to an higher chord. I'd say it was only copied pretty good.

Mellow, thanks for your apology and Red, thanks for your defense. I wasn't serious about this as a REAL Wehrmacht marching song. (Hey, I was a history major . . . I can tell the difference between 1940 and 1960). It was a ha-ha. Yes, like "Springtime for Hitler."

And this is the anonymous internet. Had no idea Mellow is a German. If it's the same guy as Mellow's Log Cabin, love the site.

Yes, I'm the same guy :) Thanks for your kind words.