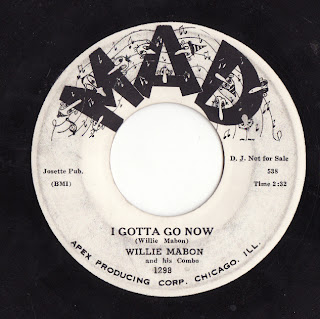 This is wonderful, thank you!

PS - You might enjoy a song I posted yesterday....

1/31/11
RobGems.ca wrote:
Mad Records had nothing to do with Bill Gaines, E.C. Comics, or MAD Magazine, but I probably believe they had a lawsuit from Mr. Gaines' lawyers no doubt. That label design alone looks like something from an old MAD Magazine graphic of the 1950's. Mad Records was a part of the low-budget Apex Records (not Ampex Tapes, they came later.)in Chicago, Illinois during 1958-1961, & specialized in either re-issuing or re-recordings of blues & rockabilly songs & artists. While the label never had a Top 40 record, their best known & most collectable release was a release by the legendary Billy "The Kid" Emerson"'s re-recording of "When It Rains, It Really Pours"/"I Never Get Enough" from 1961.

Nice one. I've been trying to snag a copy for awhile. Maybe someday, ya know?