Check Out My New Fuzz Pedal! 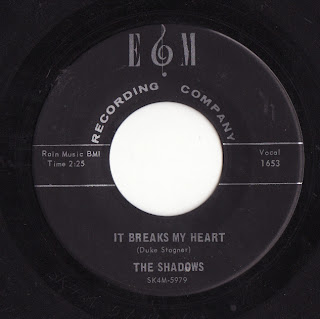 Was this an Arkansas label?

A Brief History of E&M Studios and My Records

In the 1960s, Little Rock (Pulaski County) was home to E&M Recording Company, a studio owned by Earl Fox. The initials in the company name stood for “Earl” and “Myrna,” Fox’s wife. Through his two independent record labels, E&M Recording Company and My Records, which he established later in 1966, Fox provided a creative outlet and commercial venue for local singers and musical groups. My Records, in particular, played an important role in nourishing the creative energy released in the late 1960s profusion of central Arkansas rock groups.
In 1959, Fox built a sound studio behind his house at 1612 South Buchanan Street in Little Rock; this was an avocational enterprise, which he undertook for his love of music and his desire to promote local bands. He adapted an old radio board for recording purposes. After three years, Fox rented a building at 12th Street and University Avenue for his growing business. He began issuing singles and albums under the E&M label. The music Fox recorded included jazz, blues, gospel, country, and rock and roll. A notable local hit was Bobby Garrett’s “Vampire” (1962).
In the 1960s, Fox moved his studios to 2911 West Markham Street because he needed more space. With the post-Beatles boom in the number of area “garage bands,” Fox began recording hopeful groups on his new label, My Records, a subsidiary of E&M that enjoyed regional success with such singles as “I’ll Find a Way” by the Romans (1966), “Suzanne” by the Egyptians (1966), “Burnin’ Up the Wires” by the Dutch Masters (1967), “Midnight to Six Man” by the Culls (1967), “Tears of Blue” by the Coachmen (1967), and “Ain’t No Need” by Merging Traffic (1967), who signed with Decca in 1968 and achieved minor national success with the single, “Bit by Bit.”
By the end of the decade, however, most of the local groups had disbanded. Fox continued his recording business, producing commercial and political jingles as well as music, but in the 1970s, he finally sold E&M; My Records had died two years earlier when the first wave of garage bands began disbanding as their members graduated from high school and went their separate ways. In 1999, the Butler Center for Arkansas Studies released an archival compact disc, The Little Rock Sound, 1965–69, featuring a representative selection of the My Records catalogue.

This recording was made by my former Elementary School Principal Roy Cost. Roy is still active recording writing music and performs in Arkansas.

Thanks for the history lesson. I love hearing stories about how people made records on their own. Such brave entrepreneurship.

WEird all the books & Rockin' Country Style say E&M is a (TN) label? Or were the records just pressed in (TN)?The Drunken Hobo

RSC said they were pressed by RCA so what is the (TN) connection?

Thanks for all the info!