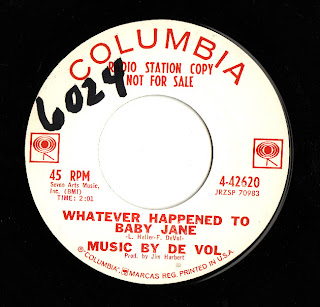 9/21/11
RobGems.ca Wrote:
Interesting period piece by Frank DeVol, composer of many fine TV shows such as "My 3 Sons", "The Brady Bunch", "Family Affair", and TV jingles, such as the 1963 Screen Gems "Dancing Sticks" logo that appeared at the end of The Flintstones & Bewitched TV shows, to name a few. "Baby Jane" appeared in 1962, and was based on the horror fest starring Joan
Crawford & Bette Davis. Devol was also an occasional Movie soundtrack composer, who composed the Motown song "The Happening""Hush, Hush, Sweet Charolette", & "Guess Who's Coming to Dinner" among others, and even acted in a few TV shows, such as "I'm Dickens, He's Fenster", "Camp Runnamuck", "The Jeffersons", and his best known acting role, the stone-faced Happy the bandleader in the TV parody "Fernwood Tonight"/"America Tonight" with Martin Mull & Fred Willard. Mr. DeVol died in 2001.