Before The LaVern Baker Treatment 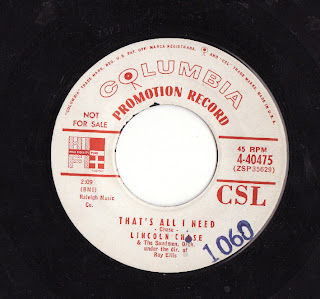 This is fantastic Howdy! Had no idea this existed. I love hearing songs interpreted by their writer.

Great way to start my day!

Yeah I love to hear the non hit versions of songs. Especially when they change up lyrics.

4/2/11
RobGems.ca wrote:
Lincoln Chase was a R&B songwriter and singer who wrote many classic songs including "Such A Night", "The Nitty Gritty", & "The Name Game". He was a mentor (and later husband) for Shirley Ellis at Congress/Kapp Records during the 1960's, and Elvis Presley was a big fan enough to record a couple of his compositions, including "Such A Night" for his "Elvis Is Back" sessions in 1960. This is an interesting entry for Columbia Records in 1957-59, as Mitch Miller, the A&R boss at the time was not known for being too enthustiastic for R&B recordings, often turning them over to his A&R men at Okeh Records for general releases, sometimes having them released on their number #2 label, Epic Records. It was rare that a R&B or Rock & Roll record got issued on the main Columbia imprint, but if it sold, even only among teenagers, Miller did try his best to push the product, even if he didn't like the style of teenaged music. Chase would eventually return to Columbia Records in 1967, long after Miller had left the label, bringing his wife/protege Shirley Ellis with him for a few Columbia releases. A now-rare album by Ellis, with Lincoln Chase producing, titled "Sugar, Let's Shing-A-Ling was issued in 1967, & is now a favorite with Northern Soul collectors in England clubs & dance studios.

Knew Lincoln only for that classic
"Miss Orangatang"