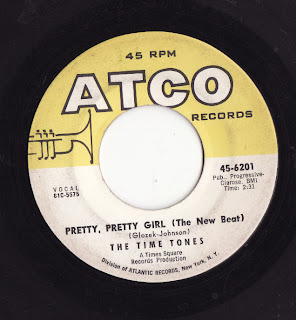 Killer,Absolute Killer From "61",This was a racially mixed group,with Roger Rue on lead.If you look at the label,you will see under the title,"Times Square Productions.In early 1961,Irv "Slim" Rose Owner of times square records accquired rights to the masters of a few local records.One being this one.Later that same year,this cut was released on Slims own Times square label.Thanks a bunch for the treat:)

Your back!!
I thought we were going to have to send out a search party.

Glad to see Mike's comment . . . confirms that this really was what we were dancing to in that basement rec room in 1963

Good lead vocalist. Somewhat like The Jive Five.
If the guy acquired the masters and released this in '61, it would've been recorded earlier.
The Doo-Wop Revival was a year later, wasn't it?