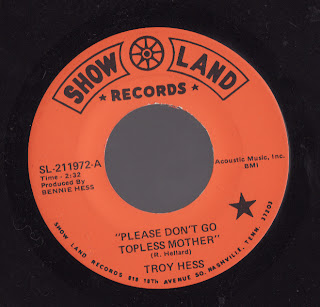 So, look... do you know where to find a copy of the "answer record", by an outfit called the Budget Girls, entitled "I Like Going Topless, Sonny"? I heard it before the Troy Hess original, about a year ago on Howie Pyro's "Intoxica" program on luxuriamusic.com. Oh, the hilarity.

(some minutes later) Well, after a couple of minutes of judicious Googling, I managed to find a collector's blog which has a copy of the Budget Girls' EP containing the "answer song" to Troy Hess, "I Like Going Topless, Sonny":

?! I've only ever heard the B-Girls Miso Hornie ep. Need to investigate. Thanks, Mr. Flugenock!

I've been called alot of things, ..and I think I like this one ( Incomparable) the best! This song, when originally presented to my parents by Ron Hellard, was flatly turned down by my parents. And because Hellard was friends with a well known song writer at the time , named Gary Paxton; together, they convinced along with some other country music insiders, my parents to let me record the song. Not a good idea in the conservative country music of the early 70's, and the record was quickly pulled from all distribution.It was purely fictional, but,lol, but at least most blogs spell my name right,ha! Thanks again for the "title"! BTW, you can reach me at showay@aol.com