Fill'er Up With Ethyl! 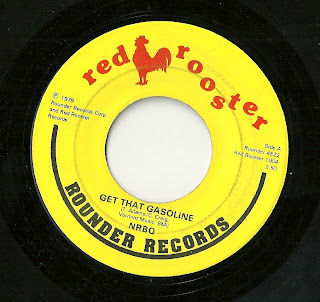 Red Rooster was a Rounder imprint from 1979 during the gas shortage. This was featured on a TV short about the US short supply of gas

Ah, the memories! I bought this via mail order from NRBQ back in the early 80s. My copy has 'Wacky Tobacky' on the flip side. Still have a stack of their semi-regular newsletters. They even sent a complimentary Xmas single one year. Thanks.

Cool Tune!Its an oldie but goodie and hard to find!Trish

Do you rip your 45s to CD?If you do you want to do a mix swap.I'll be a good mix partner!
I welcome you to check out my blog !
Keep on Groovin'
Trish

The stereo sound coming from my closely spaced monitors is excellent.

Growing up in CT heard NRBQ played on WHCN requently. The DJ, Bill Nozzle(The Nozz) seemed to favor the band. Heard they were friends...

Odd and even days...memories, like the corners of my twisted mind, misty muddy colored...

5/27/12
RobGems.ca wrote:
This is Terry Adams of the NRBQ band's own vanity label formed in 1978. This label also was notorious for re-issuing The Shaggs' two legendary god-awful albums from 1969 and 1975. They were titled "Philosophy of the World" and "The Shaggs Own Thing". Adams was a fan and collector of the bizarre, the macrabe, and the freak/cult recordings on small labels with limited disrtribution, which thanks to him, has made the untalented Shaggs more of a larger known cult group, and persecutors of female-led punk and "No-Wave" music. Thanks,Terry Adams(??!!??)