She Warps My Mind 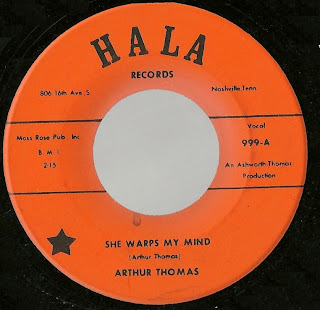 Great song, not much on the lyric end, but who cares too many lyrics would only have muddied the waters.

Had a quick look to see what I could find about Hala records. It was formed in Oct of 1967 by the Hubert Long Talent Agency and was run by Audi Ashworth (get it Hala.. Hubert-Audi etc..) It was meant as an outlet for pop artists.

Hubert Long, who owned the agency, was elected into the country music hall of fame in 1979 for his contributions on the business side of country music. A quick roundup of some of the high lites that I found - He formed one of the first independent talent agencies in Nashville, was one of the founding fathers of the County Music Association, owned Moss Rose Publishing Co. (who of course published this cut), was the manager of the Louisiana Hayride at one point and promoted Eddy Arnold to superstardom.

Audie Ashworth was working for the Moss Rose Publishing company as a song scout, plugger and producer when Hala was formed. Audi went on to produce all of J.J. Cale's albums from 1972- 1982. He died of a heart attack on Aug 29, 2000.

Anybody know anything about Arthur Thomas a quick look didn't turn up anything. I'm also not sure how long the label was in existence.

Just wanted to wish you Happy New Year. I check both your blogs every day. 45's are hard to find. I am Geri that e-mails you but for some reason Goggle took the name of another blog i visit and that is the only way i can get into anything. I can not find any solution to this problem so i live with it.