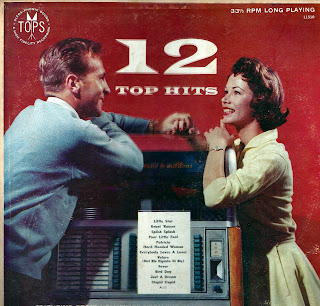 I'm curious to see what condition this one is in (not that the Tops pressings were good to begin with).

Where did you find it? (Please don't tell me at a garage sale for a buck -- I'll be so jealous).

BTW, where are all the comments? I haven't been here for a while, but I remember more people leaving comments.

Did not pay a buck for it, it was free in my local record store give away box. It has the tops quality sound! Comments have dropped off quite a bit, Don't know if the blog is dying off or if the music is not worth commenting on. Thanks for leaving yours !

I can't believe it was free -- I've heard about those free boxes outside the record stores, but I've never seen a place that had one.

Traffic at the public music blogs has dropped off a lot, especially since a lot of links have been repeatedly pulled for no apparent reason. MediaFire took down several uploads within twenty minutes even though there was no apparent copyright infringement. And some people have gotten harassed because they left traceable comments on blogs that got shut down.

I always find most of your posts interesting, so I don't think that's a problem at all.
If you ever go private, or hook up with a private blog, send me an invitation.

BTW, in what state(s) are you record hunting? I'm in NYC where most of the record stores have closed down (I think we're down to two small independent shops), and the "thrift" shops are thrifty in name only.

My record hunting is in the mid south. Memphis, Nashville Little Rock, to Dallas and Oklahoma. The Stores that are in Little Rock and North Little Rock are excellent to find records. Record collecting is a dying breed I am afraid. A Pity really, most of the younger folks with the exception of a few hipsters seem to be content with buying internet subscriptions and MP’3s. All they own is a piece of code that they cannot feel or hold or sell. The independent record stores are barely scraping by, Enjoy them while you can!

The "Times They Are A Changing" aren't changing anymore ... they've "left the bloody building"! Please keep up your good work as long as you can. There are still tens of thousands of 45's from the 50's and 60's I have never heard. People like you and the internet have given us old record dogs a reprieve. Without ya all, I'd be left to watch old Archie Bunker reruns.