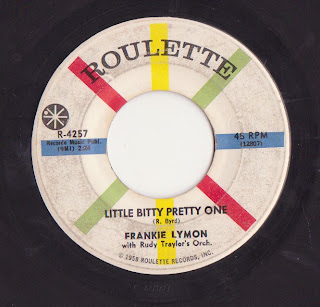 Reminds me of Doug Funny!

Hey, thanks for this. Have the Bobby Day and Thurston Harris versions but hadn't heard this one. Cheers!

5/28/12
RobGems.ca wrote:
This cover doesn't top Thurston Harris' great version, but it's good enough in it's own way for Frankie Lymon or doo-wop fans. Unfortunately, it would be Lymon's last chart entry, as his voice was begining to crack by his 13th birthday, and he couldn't really hit the high notes too well as he did in 1956. Also, Lymon just signed a rather paltry contract with Roulette Records' boss/hatchet man Morris Levy, which left him high & dry by 1964, and then caused him to enter the Armed Forces. By the time he got out in 1966, he was never the same again, becoming a full-blown junkie by that point,and dying in 1968 just as he was to embark on a comeback with Morris Levy and Roulette Records at the helm. Levy had to have been one of the most unscrupulous record company executives in the history of the recorded industry, as Tommy James once recalled about him in his biography, Levy was a suspected member of the Genovese Mafia family, and upsurped many of his Roulette artists on royalties, and even phony songwriting claims (no, Levy did NOT co-compose "Why Do Fools Fall In Love" and many other compositions for Gee/Gone/End releases.) The surviving members of The Teenagers had to fight in court custodies for those royalties, and didn't recieve any until the mid-1980's when Levy was convicted for fraud and money laundering for his record labels. Not even John Lennon could break free from preventing Levy's illegal release of a 1974 Adam 8 album titled "Roots John Lennon Sings The greatest rock & roll songs."